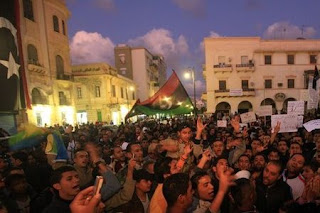 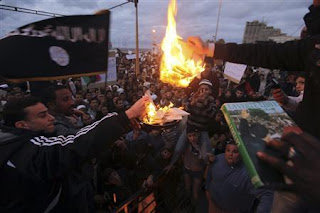 21/01/2012 - BENGHAZI, Libya — Angry protesters threw home-made grenades and stormed Libya's ruling National Transitional Council offices in the city of Benghazi, setting its front ablaze on Saturday, witnesses said.
The attack, the first such violent act against the NTC -- the body which is ruling Libya since the fall of Moamer Kadhafi's regime -- came in the eastern city which was also the first to rise up against the dictator last year.
The attack occurred as up to 2,000 protesters, including injured former rebels who helped topple Kadhafi's 42-year-old regime, demonstrated outside the NTC offices, witnesses and an AFP correspondent at the scene reported.
Witnesses said the grenade blasts occurred when wounded former rebels were protesting at being "marginalised" in the new Libya, demanding more transparency in the NTC and opposing what they said were opportunists from joining the ruling body.
Protesters in Benghazi have held demonstrations for several weeks, accusing the NTC of lacking transparency and recruiting members who were once seen as loyalists of the former regime.
On Saturday at least three blasts were heard by the AFP reporter who said he did not see any damage to the office or any casualties.
"The demonstrators attacked the building and turned NTC offices upside down," an NTC member said on condition of anonymity.
Other witnesses said protesters, armed with stones and iron bars, stormed and ransacked the offices as they occupied them.
"They set fire to the front (of the office), broke windows and damaged one of the armoured cars that was there," said Fathi Baja, NTC member and the council's political affairs chief.
He said he and NTC chief Mustafa Abdel Jalil, who had visited the office to calm the protesters, got out of the premises separately, adding that he was unaware of who was behind the attack.
"We do not know. Some were very young, like 15 years, some older. There were many. Some called for the resignation of the entire NTC except... Mustafa Abdel Jalil and another member," Baja told AFP by phone from Benghazi.
Abdel Jalil too faced the fury of the protesters as some threw plastic bottles at him when he tried to calm them down, witnesses said, adding that a brigade of some former rebels secured a passage to allow the NTC head and other council members to leave the building.
Home-made bombs were used regularly by the former rebels during last year's conflict against Kadhafi, especially to attack checkpoints of the former leader's forces.
The grenade blasts and ransacking of NTC offices come just two days after the council's deputy head Abdel Hafiz Ghoga was manhandled by university students in Benghazi.
Ghoga, who also serves as official spokesman for the interim government, had to be escorted away after being mobbed by angry students at the University of Ghar Yunis in Libya's second largest city.
He escaped unharmed but was forced to endure a tirade of abuse from the crowd, who accused him of opportunism because of his belated defection from the Kadhafi regime.
22/01
The deputy head of Libyan ruling National Transitional Council (NTC) Abdel Hafiz Ghoga announced his resignation after the national wave of mass protests against the new government, the Al Jazeera TV channel said on Sunday.
Posted by sysiphus at 16:47