Val Susa, Italy - Sabotage against collaborator of the construction site and dissociation of the No Tav movement 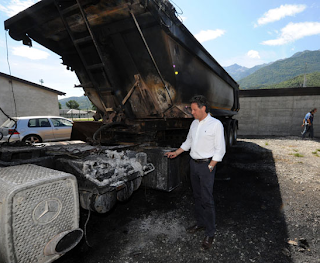 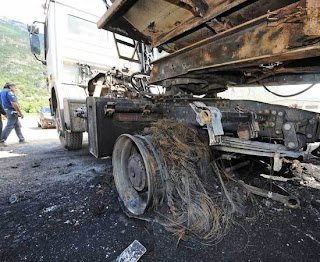 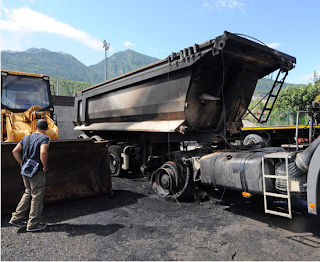 25/07/2011 - From the local press - Last night around 4am, Italcoge, one of the companies working on the site of TAV, was attacked. Vandals set fire to five trucks parked outside the Susa headquarters. They forced a gate to enter the courtyard. After putting "diavolina" on the tires [that is to say, fire starter, or ZIP Ndt], they then set them on fire: one truck was completely destroyed, another heavily damaged and three others slightly so. After the attacks against the construction site, this is the first raid against the Valsusine company. Some time ago, a founding partner of Italcoge, Ferdinando Lazzaro, was assaulted in the street by demonstrators who had sent him to the hospital with a fractured elbow.
The No Tav, on their official website, deny their involvement in the raid: "We believe that this gesture does not support the No Tav movement, but is an attack and a way of intervening in the struggle that we do not share. (...) This act goes in the opposite direction of the No Tav initiatives that make participation and mass resistance the central node of a battle that makes gifts to no one .. ".
Translated from the Italian from a local newspaper, reproduced on informa-azione, Monday, 25/07/2011 - 12:39
cette semaine, translator's note: Mass has been pronounced! May each one say what they think clearly about this sabotage and the reaction of all those involved in the website of the para-institutional No Tav movement, who would continue to use it to send texts or translate theirs (especially in France without at least clarifying that this is a site of collaborators with power).
And enough about on this "mass", this "people" of the valley that would all be standing together ... First, there are pro-Tav people in the valley, and then some of those who are against it are not resisting it. Finally there is the question of why, especially for all those who resist. And finally, there is above all the question of why, for all those who are resisitng.
Why that can more or less lived according to taste, at least until some dissociate from others by pointing them out to the cops: according to these scales, the unknown authors of this successful and focused attack would be those who do not make the "masses" the alpha and omega of their ideas and practices, those who think that attacks of the few are not inconsistent with the rallies or demonstrations of the many. Follow their eyes ...
This practice of dissociation (or distancing oneself, as appropriate) and its consequences (indicating to power who to suppress in order to save one's own ass), is not an isolated case, it is more than common in all "popular" struggles, at least since the 70s. May each one draw the practical consequences against this garbage (www.notav.info managers, since this release was signed directly by the site) and their friends: on the one hand those who defend it, on the other those who, in not breaking with them publicly and clearly, are socially contributing to their power to harm ...