Trento, Italy - Vodafone antenna destroyed by fire in solidarity with Billy Costa and Silvia and the struggle against the TAV 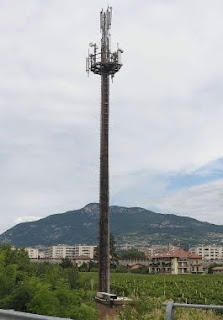 28/07/2011 - A tongue of flame hundreds of feet high. So, on the night between Sunday and Monday, fire destroyed the Vodafone antenna on via Fersina, within walking distance of Dolomiti Energia and some houses. Arson, fed by a bottle of gasoline on the ground, among vines and corn, the claim: "The unpredictability of life will take you with fire." And then "No Tav", "No harmfulness" (already left as a signature on the wall of the railway construction site in Rovereto in the arson attack of ten days ago), and "against power and against control," and finally "freedom to Billy Costa and Silvia." A leaflet written by hand with a sharp-edged calligraphy reminiscent of the writings of the years of terrorism. Writing, above all, that makes it impossible to identify the handwriting. The investigations of the police are, as always in the early stages, 360 degrees, but the track is most likely anarchist. Also because in the past mobile phone repeaters were in the viewfinder. The alarm was launched around 2 am by a passerby who saw the antenna turned into a huge torch. Hence the intervention of firefighters and police. The first engaged in trying to minimize the damage, the latter in search of items that can help get identification of the authors of the fire. The chosen area is within walking distance from Dolomiti Energia but also a short distance from houses even though the antenna is immersed in a vineyard. According to a first hypothesis, those who started the fire left the car along the road and then walked into the country. With them, it seems, they had a plastic bottle which was found with a few drops of gasoline still inside. Then the fence that runs around the repeater,which was soaked in inflammable liquid, was cut. At this point it took a little flame to start the fire which quickly conquered the whole antenna. The heat burned the skirt that covered the wires thus making it useless to the repeater and causing thousands of euros damage. Yesterday, after an inspection of the engineers in charge carabinieri arrived to find a quick solution, but it seems that the intervention is not easy. Nevertheless, there was no major inconvenience to Vodafone mobile with regard to coverage. Concerning the arson it has been advised that the prosecution will now have to carry out a series of investigations to try to reconstruct what happened.
Posted by sysiphus at 16:04