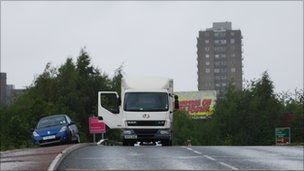 18/07/2011 - Two prisoners have escaped from a jail van after it was ambushed by armed men on the outskirts of Manchester city centre.
..The pair were being transported to Liverpool Crown Court, where they were on trial.
The men, both from Liverpool, stand accused of conspiracy to possess firearms with intent to endanger life.
A spokesperson for security firm G4S said: "At around 0820 BST, one of our prisoner escorting vehicles was involved in an incident on the outskirts of Manchester.
"The vehicle, which was en-route to Liverpool Crown Court carrying two prisoners, was intercepted by several armed men wearing balaclavas.
"The men stopped the vehicle, assaulted the driver and forced him to open the vehicle and release the prisoners, who then escaped in another vehicle.
"Our crew immediately alerted police. The injured driver, who was struck on the head, has been taken to hospital where his condition is being assessed."
Posted by sysiphus at 14:53