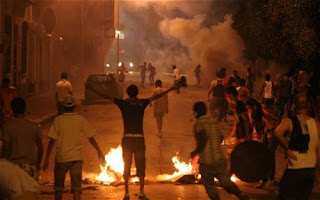 18/07/2011 - TUNIS - A child was killed and at least two other people were seriously injured in violent disturbances that occurred in the night from Sunday to Monday in the town of Sidi Bouzid, a town in west-central Tunisia where the popular uprising sparked that brought down the regime of Ben Ali in January, reported Monday the official news agency TAP.
The 14-year-old victim was hit by a "stray bullet" in clashes between police and protesters..the police had earlier tried unsuccessfully to disperse the crowd of demonstrators.
According to TAP, demonstrators attacked local army units and police with throwing Molotov cocktails and stones around 22h00 Sunday, blocking the road and setting fire to tyres, which led the military to retaliate by carrying out warning shots.
Nine people were arrested.
Vandalism and clashes continued until dawn Monday. Military reinforcements were dispatched to the scene while a military helicopter scoured the skies above the city.
The TAP also reported the theft of motorcycles and six cars from the police and municipal depots and damage to vehicles that were there. Official documents were also destroyed. Protesters set fire to one of the stolen cars in the main street of the city and smashed shop fronts.
Calm seemed to return Monday morning in Sidi Bouzid, the agency notes, however, a tense situation in the city of Regueb, about thirty kilometers from Sidi Bouzid.
The Sidi Bouzid disorders occured in the wake of an outbreak of violence in several cities in northern and central Tunisia.
The most serious violence took place in Menzel-Burgundian, 70 km north of Tunis where, according to the Interior Ministry, four members of security forces were seriously injured.
Posted by sysiphus at 14:28