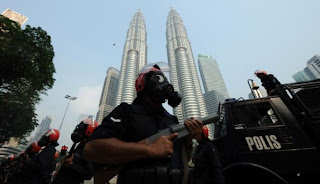 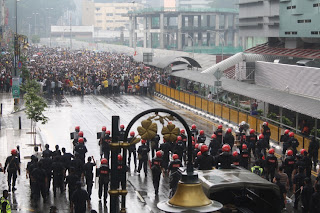 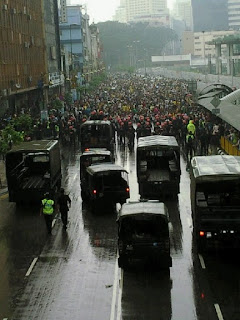 “… i send this news not because i agree with the objective of this civil liberation organization but more importantly, we are involved in the protest because of its support from ordinary people who are against the repression from authorities and the dictatorship government.”

Latest News :
On 9 July, BERSIH (Coalition for Clean and Fair Elections, it is a coalition of leftists, NGOs and activist groups that advocates changes in the elections laws) made a rally which should have been a peaceful protest about electoral reform changes, the authority instead made Kuala Lumpur city into a police state. All road access has been blocked, shops and office buildings entirely been shut down for almost 16 hours. Public transport like trains being stopped in their services almost for every city station.
The police deploy almost 7000 officers with 3 helicopter unit. At night they start searching and arrest supporters and those are who are sleeping in hotels around the city, before the rally almost 250 people have been detained. At the end of the rally day, the number arrested increased up to 1500 people. 1 old citizen was dead after he fell down from a ladder in KLCC building when he tried to runaway from tear gas which was fired, police claim the death was caused by his personal health.
Almost all left political parties and organization leaders were arrested before the rally started. But people spontaneously organize themselves to rally arouhttp://www.blogger.com/img/blank.gifnd city from Petaling street until KLCC roads. Estimates of the Bersih-supporting marchers put the figures at anything between 20,000 to 40,000 people; the government only claims 6000 people. Police used heavy violent force against the marches.
They shot tear gas inside a closed building (train station) which could have caused death because of that room full with people and shot tear gas direct to body protester, they also fired tear gas in hospital building after protester run away from the street. The rally ends up at 5 pm after the long march around.
Of course, objective of this rally only give more benefit to leftist politician, but for ordinary people their objective is that they just want to prove to other Malaysians that there are possibilities to make a social revolution. And also to show the truth of dictatorship rule in this country.

Link about leftist coalition for some info – http://bersih.org/
Posted by sysiphus at 13:48