Bellinzona, Switzerland - Mobilization for the Trial of Silvia, Costa & Billy 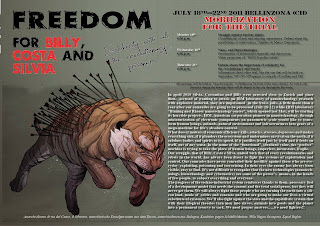 Freedom for Silvia, Costa & Billy – Solidarity with all the Revolutionary Prisoners

All meetings will be held in “Casa del Popolo” in Bellinzona, Switzerland, (in front of the train station). As well as the presence during the hearings there will be demos in the city throughout the week.

18 July – 6pm : Struggle against Nuclear Plants
Contributions of past and ongoing experiences. Debate about the possibilities of intervention. Updates on Marco Camenisch

21 July – 6pm : Debate about the importance of solidarity for the revolutionary movement
Information about other trials, like the one that will be held on September 28-29-30 against a comrade of Aufbau and SRI

In April 2010 Silvia, Costantino and Billy were arrested close to Zurich and since then, accused of wanting to attack an IBM laboratory of nanotechnology research with explosive material, they are imprisoned in the Swiss jails. A little more than a year after our comrades are going to be processed (July 18-22) while IBM laboratory “Binning and Rhorer nanotechnology centre”, which opened last May, will be starting its horrible projects. IBM, American corporation pioneer in nanotechnology, through miniaturization of electronic components on nanometric scale would like to transform human beings, animals, natural environment and infrastructures into gears of a mega-machine for life’s absolute control.
What does it matter if economic efficiency kills, attacks, stresses, depresses and makes everything sick, if it plunders the ecosystem and undermines survival on the earth, if it subdues bodies and spirits to its speed, if it justifies itself just by itself and it feeds on itself, out of any sense. In the name of the “functional”, idealized value, the “perfect” machine is trying to take the place of human beings, imperfect, inconstant, fragile.
Our struggle, that of Billy, Costa and Silvia, united with that of every revolutionary and rebel in the world, has always been direct to fight the systems of exploitation and control. Our comrades have never concealed their hostility against those who are everyday exploiting, poisoning and terrorizing. In their eyes the enemy has always been visible, easy to find. It’s not difficult to recognize that the new technologies (nanotechnology, biotechnology and cybernetics) are some of the means of power, in the hands of a few people, to subject everything and everyone.
The progress of the techno-industrial system reinforces thanks to them, necessary fuel of a development model that needs the consent and the total social peace, but they will never get them. We will always fight those people who are turning the earth into a silicon land, made of cables and concrete and who are going to make our lives a virtual substitute of existence. We’ll also fight against the state and the capitalistic system that with their illogical theories turn men into slaves, animals into goods and the planet into a permanent reserve to sack. We need proper answers… we need fighters!
Posted by sysiphus at 11:49