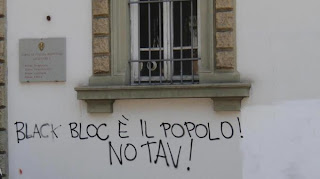 07/-7/2011 - A demonstrative but disturbing gesture. Last night a five-litre jerry can containing petrol was found leaning against the iron girdle of a machine that drills the cores inside the building site on the TAV Pacinotti area at via Pacinotti. Around midnight a passerby saw flames rising from the tank and called the fire department. Along with the tank, there has appeared on the wall of a building in the Campo di Marte the words "black bloc is the people, no to the Tav." In the vicinity of the site another slogan could be read:''It's Spring in the Susa Valley - No Tav now and never''and''The rebels in the citie will not sleep.'' Next to it there is' a symbol of the collectives.
Turning off the start of the fire was not a problem, but the nature of the gesture led the firefighters to immediately notify the police. According to investigators, the most likely hypothesis is that someone entered the site, accessing it from above, from Ponte del Pino, which goes right to the point where, the tank was found. Which was therefore placed against a digger, without being launched. This reconstruction, if confirmed, would pose new problems for the security of the Tav construction site, which, in Florence, involves two large areas on the surface, to the north and south of the city. The gesture of intimidation occurred in the south, at the Campo di Marte, where, in a few months, the "mole" will begin to dig a tunnel of seven kilometres.
Ongoing investigations on the matrix of the gesture: a challenge to the work of TAV or a 'warning' for the hearing this morning in court against members of the antagonist area accused of previous damage.
Posted by sysiphus at 13:52