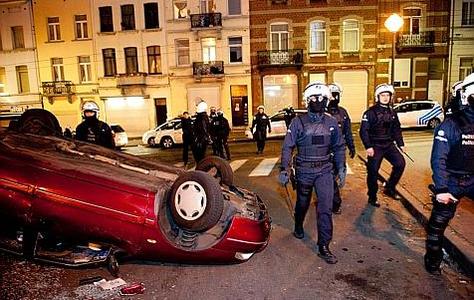 In the night of Monday 12 to Tuesday 13th of April, riots broke out in Saint-Gilles at Bethlehem square. Earlier that day, the police had wanted to control a car. The car drove away, a chase of an hour followed. The police shot one man, his companion tried to flee by jumping off a 20 meter bridge. He's fighting for his life in the hospital. The man who died lived near the Bethlehem square, where riots broke out in the afternoon. A police car was torched and the windows of a police office were smashed. In the evening, oil was poured to make police manouvres more difficult. Several cars were torched and the police were attacked with stones and Molotov cocktails. The police arrested tens of people and a helicopter controlled the area.
Tuesday, the police tried to arrest a group of youngsters throwing stones at them in Molenbeek, but didn't succeed. More arrests in Saint-Gilles after a verbal fight with the police. In the night of Tuesday 13 to Wednesday 14th of April, in Molenbeek, two cars were burned and a Molotov cocktails was thrown at the door of a synagogue, causing limited damage.