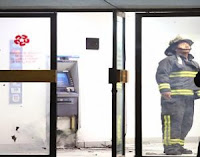 Two gas cannisters strapped together with tape exploded yesterday in a cashpoint of a bank agency in the centre of the City of Messico, in an action that caused only material damage and has not been claimed by any group, the police of the capital have informed.
The action took place during the night in a bancomat of the Banamex, the belongs to the American Citigroup, at the corner between San Antonio Abad and Taller, in theTránsito area.
The explosion destroyed windows, ceilinmgs and some lights, but there were no wounded. Over the past few years similar explosions have taken place in Mexico City, similar to that in the cashpoint, most of which have not caused any wounded and have been claimed by groups of anarchists.
from culmine
Posted by sysiphus at 09:00