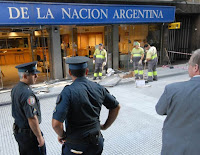 from the Argentinian press
Another bomb has been placed at an agency of the Banco De La Nacion, this time at a cashpoint between Lavalle and Florida. Two weeks ago a similar attack took place at the agency in Belgrano and in February the offices between Corrientes and Uruguay. There were no wounded in any of the cases only material damage. The police made it known that a slogan criticising Kirchner and Macri (the Kirchners, husband and wife, presidens of the Argentinian republic; Mauricio Macri governor of the city of Buenos Aires - ndt).
Today's explosion destroyed the facade of the building.
.. The attack was claimed by a group “Pandilla VandalikaTeodoro Suarez”*, which in a leaflet criticised the Kirchners and the governor Macri. “For the acceleration of their fall, freedom of the prisoners, the execution of the guards and police, Makri and his police state out” said the leaflet.
continuing "with this we claim to contribute to the destruction of money and the prison, police, capitalist and alienating society that aliments it, for this it is necessary to blow up each of the pillars that support it. No matter how they try to reinforce themselves and make themselves indestructable, they always leave cracks open in which it is possible to attack then disappear.
Police sources say that the device was a kind of extinctor filled with explosives.
Posted by sysiphus at 06:25