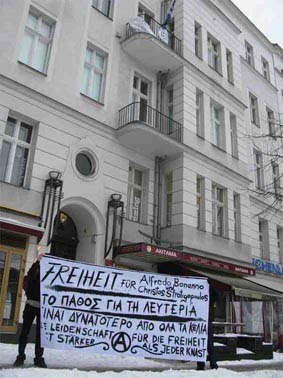 Some flyers have been given out to the passer-byers. A fax has been given to the consul and sent over to the „minister for justice and human rights of Greece“. The fax sent was the same one Greek comrades already sent over during the last days in a similar action.
Alfredo and Christos, both active since long time in the anarchist movement, have been arrested on the 1.10.09 in Trikala, Greece, accused of committing a bank robbery.
Alfredo, 73 years old anarchist comrade from Italy has serious health problems and suffers under the heavy conditions in prison. Despite the fact that the Greek law prescribes an earlier release upon serious health problems, the authorities refused until now to set him free.
This small action has been a piece of solidarity along the struggle for the release of both comrades. Different expressiona of solidarity took place in different countries within the last months.
You can check further infos about the two comrades and the solidarity actions under:
www.abc-berlin.net (in german)
www.aftertrikala.blogspot.com and www.325.nostate.net (in english).
Posters in solidarity with both comrades have been printed lately and one can get them by writing to the abc berlin.
For the immediate release of Alfredo!
Freedom for Christos and all the prisoners – prison to become holes in the ground!
Posted by sysiphus at 13:56