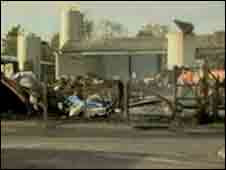 Plastics factory
Fire spread from a perimeter fence area to outbuildings
An 18-year-old from Norfolk has been charged with an arson attack on a plastics factory in Suffolk.
About 50 firefighters were needed at Chase Plastics, London Road Industrial Estate, in Brandon, on Saturday.
David Allison, 18, from Peppers Close in Weeting, Norfolk, has been charged with arson and will appear before Bury Magistrates' Court later.
Two males, a 15-year-old from Brandon and 18-year-old from Thetford have been released on police bail.
Posted by sysiphus at 05:30