A visit to the Greek embassy in London. Solidarity to Alfredo and Christos 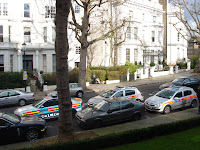 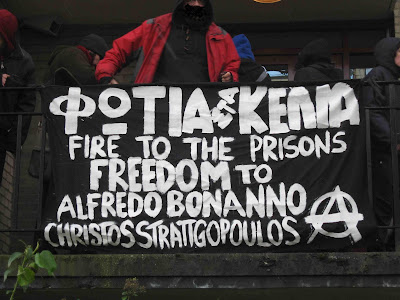 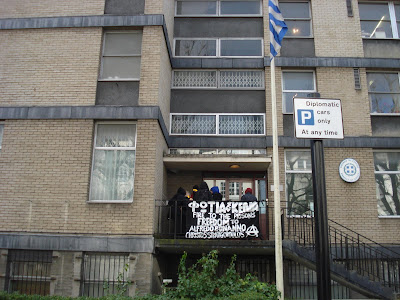 On Wednesday, 10 February at around eleven am. a group of comrades and friends went to the Greek embassy in Holland Park, London, in protest against prison conditions in Greece, and to hand in a fax to the Greek Ministry of Justice (see below) demanding the immediate release of anarchist Alfredo Maria Bonanno who has now been held for six months on charges of concourse in robbery despite his increasingly precarious state of health. The group went to the main entrance with a letter and tried to enter, after attaching a banner to the railings of the balcony saying ‘Fire to the prisons (in Greek and English). Freedom to Alfredo Bonanno and Christos Stratigopolous’. Embassy officials refused to open the door and could be seen cowering in the background as, seconds later, five police cars arrived on the scene and a consistent number of police ran up the steps and into the Embassy, the symbolic State boundaries that existed in 2009 having been broken. With the normal contempt of governments towards the people they claim to represent, the embassy refused to accept the letter. Despite attempts by the police to get the comrades to leave, they stood their ground and continued to occupy the balcony while others gave out leaflets and copies of the fax to passersby. Meanwhile more police arrived, some visibly carrying guns. The group only left after the letter was seen to be in the hands of the embassy boss.
This small demonstration of solidarity was aimed at showing the Greek State that our comrades are not alone. We know perfectly well that such acts are in themselves futile concerning the struggle against repression and the fate of our comrades, and should be seen in the context of a wider and deeper projectuality of international solidarity aimed at a generalisation of the attack on the existent.
In fact, the same evening we got news that, once again, the application for bail for Alfredo on medical grounds has been refused, confirming what is now clear to all, that the continued incarceration of this comrade has little to do with judicial procedure, but is a question of political revenge aimed at his physical and psychological destruction. Whether they will succeed or not is a question that concerns the whole movement, it is up to individual comrades to decide where they stand. Already diverse manifestations of solidarity have taken place in various parts of Europe and beyond, as part of the struggle in course. May this continue to spread, each according to their own creativity and choice of methods.
Any act of solidarity for a comrade turns out to be an act for all. It affects all the exploited, inside and outside the prisons of capital in our common need to throw down the walls of oppression and misery everywhere, tear every prison to the ground right to the last stone, and break out into the infinite challenge of freedom.


letter to the Minister of Justice

London
10 February 2010
To the Minister of Justice, Trasparency and Human Rights,
Athens.

We are here today to denounce the ongoing imprisonment of Alfredo Maria Bonanno in the prison of Koridallos, Athens, in spite of the announcement of new detention measures by the Ministry of Justice whereby thousands of prisoners presently being held in conditions that amount to torture in Greece’s overcrowded prisons and concentration camps would be released while awaiting trial.
Given his advanced age, his seriously compromised health and the fact that the charges against him fall into the category of a misdemeanor, it is patently clear that the protracted detention of this 73-year old anarchist comrade is not based on the official judicial accusation of concourse in a robbery in the small town of Trikala six months ago, but is an exemplary case of political revenge against his ideas, aimed at his physical and psychological annihilation.
Active in the anarchist movement for decades, one-time militant in the resistance against the dictatorship of the Greek colonels (1967-1974), writer and editor of many anarchist theoretical works: these are the political reasons why Alfredo Bonanno continues to be held under life-threatening conditions.

With the present, we, a few anarchists and lovers of freedom in London, demand the immediate liberation of Alfredo Maria Bonanno.

For the destruction of all prisons


leaflet handed out outside the embassy

Like every other population on the planet, the Greek people are facing a situation of grave economic hardship due to the greed and avarice of bankers, politicians, church leaders, within the context of a global economic system based on the plundering and abuse of natural resources and the exploitation of millions of people.
In that beautiful country, considered by many here as no more than a pleasant holiday resort, it is, as always, the young people, immigrants, over-exploited workers and unemployed to bear the brunt of the crisis. Brutal policing and judicial repressive measures are being employed, and these are sure to get worse over the coming months as more and more people are pushed beyond the limits of stoic endurance. During the weeks following December 6 2008, the whole country was shaking at the wrath of school pupils rebelling following the murder in cold blood, by a policeman, of a fellow pupil, Alexandros Grigoropoulos. They were joined by thousands and thousands of anarchists, immigrants, students and young unemployed, in a widespread social rebellion. Representatives of the repressive forces of this country are now present in Greece to help their Greek counterparts in the repression of all forms of protests while the Greek people continue to suffer the consequences of the economic choices made by the above.
In spite of a protracted hungerstrike in November 2008 involving 7-8,000 prisoners, Greek prisons are full to overflowing and some are such that even the guards refer to them as extermination camps. Promises by the politicians of the recently elected Pasok (socialist party) in government have been mainly ignored and thousands of prisoners continue to suffer in appalling inhuman conditions.
At the present time all expressions of anger and rebellion in Greece are being brutally repressed, inside and outside the prison walls, but the struggle for freedom is vibrant and alive, and is an inspiration everywhere.
The spirit of rebellion will never be suppressed.
Active solidarity in the struggle.
Destroy all prisons

a few anarchists
Posted by sysiphus at 09:54