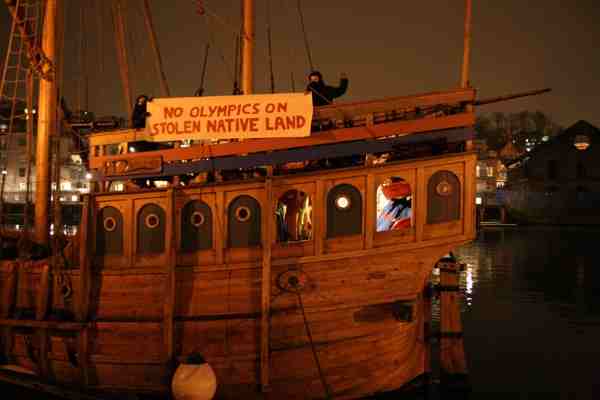 Wednesday evening a small, but rowdy group of local anti-Olympic athletes gathered in Bristol to show their solidarity with those resisting the Olympics in Vancouver, where there has just been several days of action against the five ringed corporate circus on stolen native land.
In Bristol, anti-Olympic athletes did a tour of the city center, making the link between the invasion, colonisation and subsequent genocide of indigenous peoples in “Canada”. They targeted the corporate propaganda screen in Millennium Square, John Cabot and the Matthew.
The Matthew is a replica of the ship that John Cabot sailed from Bristol to what is now called Newfoundland. This helped start the colonisation of the Americas, which has lead to over 500 years of exploitation and genocide in "Canada". It is a sad reminder of the legacy contained in this city's history.
The London 2012 Games are just around the corner and there is not better time to start your training as an anti-Olympic athlete!