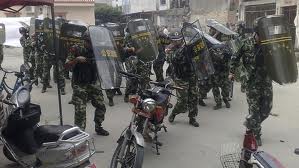 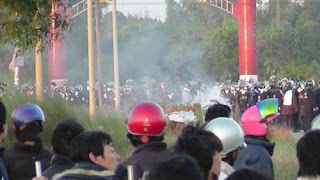 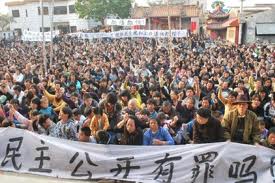 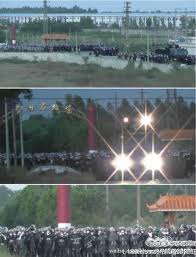 "For the first time on record, the Chinese Communist party has lost all control, with the population of 20,000 in this southern fishing village of Wukan, Guangdong now in open revolt." (Telegraph) Enraged over government land grabs, villagers have now overrun local authorities and driven police out. They remain barricaded within their village, roadblocks set up by both police and villagers preventing food and water
...For months, the 20,000 villagers who live in Wukan, near the city of Shanwei in the Guangdong province, have protested first against having nearly $154 million worth of their land seized and sold off by the local government, and then at the brutal tactics used by police to regain control.Back in September, villagers rioted, chasing out the local party secretary and drawing a harsh response from local riot police. The crackdown that followed resulted in the alleged death of a child. If that wasn't enough to further enrage locals, some of the seized land was was the site of a local cemetery. ...Locals said the land sold was collectively owned by the residents. They were unaware of the sale until construction work began on the land. Their outrage was also fuelled by the fact that some of the land was used for the graves of the village people’s ancestors.
4,500 villagers marched less than a month ago promising to escalate the situation if the government failed to solve the land problem.
The situation began to heat up again last Friday, when authorities arrested five of the villagers' 13 self-appointed representatives negotiating a solution. Another confrontation between villagers and riot police took place on Sunday at barricades set up by villagers to keep police out.
Then on Monday things really came to a head when one of the arrested representatives, Xue Jinbo died in police custody of a reported "heart attack." His family claims he was murdered.there are now no police, or government officials.

China's internet censors have blocked searches relating to the village of Wukan.
Villagers say that they have enough supplies to hold out for only 10 more days.
Wukan has been encircled by the police cordon since Sunday, after a failed attempt by 1,000 armed police to capture the village. No food or water is allowed in, and no villagers allowed out, some food is being smuggled in from the next village on motorbikes.