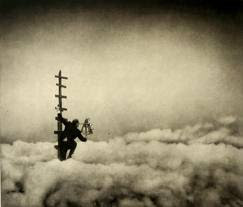 
We've seen you. We've heard you. You're everywhere. We know who you are. You are the 99% protesting against the excesses of capitalism and the wrongs of the State. You are the 99% who want electoral reform, social alternatives, economic subsidies and political measures. You are the 99% terrified of losing their future, of no longer being able to live as you have done till now: a job, a salary, a mortgage, a pension. Live and let live, at least. Have a career, at best. That is what you are asking for.
Waiting for a happy ending that never arrives, you cannot tolerate that some do not share your daydream resignation. From Madrid to Athens, from Rome to Portland, you are ready to stop, denounce and beat up the angry ones do not see the institutions as guarantors of freedom but the cause of misery and oppression. You only appreciate revenge in fiction films; when the mask is off you prefer submission. Faced with a hideous rotten society you fight in favour of a civil, measured, educated protest. A protest that remains at your level: on its knees.
Now we know who the 1% that you hate so much are. With your cordons, your stewards, your accusations, you have shown everybody who your real enemy is. It is certainly not the ruling class, whom you address with respect. It's us. We, who do not have a State to defend or improve. We, who do not have a market to protect or exploit. We, who do not want to exercise or suffer authority. We, for whom life is not reducible to a card to clock in with or a bank account to be safeguarded. We, for whom the crisis was not born with the recent speculations in the Stock Exchange or the incompetence of those sitting in Parliament today, but from living in this very social order in all its aspects. We, for whom every day is precarious in this world that we did not ask for, in which we have never seen ourselves, which suffocates us.
We want nothing to do with your 99%. With your claims for a moderate capitalism and a well-run State. With your political gait that reduces power and privilege to the dimensions of a credit card. With your urban camping like nostalgic Boy Scouts. With the identification of your opponent, the source of the "injustice", becoming more and more nuanced, intangible and out of reach. With your arms ever more outstretched to politicians, industrialists and guardians, and always more vigorous against the rebels. With your weaker and weaker actions that have become just a cozy interlude for the status quo. No, we don't want your reforms, your collaborationism, your alienating jobs, your left claims reheated so many times that they make us throw up.
We know what the real causes of the suffering we experience are: the thirst for power, the worship of money, but also the obedience they demand and receive. These causes continue in the daily lives of human beings, in the actions, gestures and relationships that intertwine in a society where we feel strangers everywhere. And these causes - which must be rejected, deserted and demolished - have been welcomed in your movement. We never felt at home in 99% of our modern life spent lining up to beg for crumbs, and yet you insist on defending 99% of the problem. We'll take our chances elsewhere. Through the hopes, dreams and actions that have earned your condemnation.
Carry on crossing the ocean of universal indignation. Raise your sails passing the ropes to bureaucrats and policemen. Share space and air with the scum that have made life on this planet unlivable. Go straight to a new tomorrow, with the hold full of the shit yesterday. We won't come aboard your ship, if anything we'll get off it. And we will stay on our rafts that you despise so much because they are small and light.
But be careful. A vessel that sails with our enemies on board is too good a chance to miss. Laughing? You're not afraid of us because we don't have the strength to come aboard? You've got it wrong. We are not interested in your gold, we do not want to conquer you. We want to make you go down with your entire cargo of death. To do so, we do not need a majestic fleet, just a fire ship. Small and light.
Posted by sysiphus at 17:52