Athens, Greece - Escape attempt from Koridallos prison by Panagiotis Vlastos and three comrades of the CCF 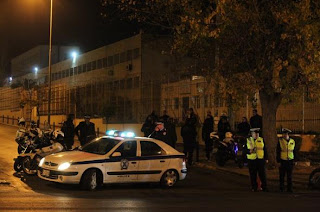 Press release about what happened in Korydallos, Greece, on December 12 2011

Warning! This summary of events is based, in large part, of news and reports from the media. The news of some prison guards taken hostage by the prisoners, an action that lasted several hours, was yesterday and still is on the front pages of the media. A version, or rather, the different versions of the facts presented by TV and newspapers have so many contradictory details that are not worth mentioning. The statements of the prisoners have been transmitted in a fragmented way, we hope later to reproduce them in their entirety. The situation in the Greek prisons is however explosive, and the facts of yesterday may have an unexpected continuation ...

Yesterday, Monday, Dec. 12, shortly after 18.00 a group of four (or five) prisoners attempted to escape from Korydallos prison. They are Panagiotis Vlastos, defined by the press as "one of the most dangerous criminals in the country" (arrested in 1998 after a shootout with the police and accused of a series of robberies, murders, kidnapping of a shipowner, etc..) and members of the Conspiracy of Cells of Fire: the Mihalis brothers and Giorgos Nikolopoulos, Christos Tsakalos and Giorgos Polydoros (some media reports have also mentioned Theofilos Mavropoulos).
But finding themselves trapped in the vicinity of the visiting room, with the help of a gun and some knives they took 3 guards as hostages. At that time there were about 25 family members of prisoners in the visiting room, including some family members of anarchist prisoners, such as the mother and cousin of Stella Adoniou and the parents of Kostas Sakkas. All of them were trapped, most likely because the jailers in the meantime had closed all the entrances. Nevertheless, newspapers have been writing articles titled "Members of the cells have taken the family hostage."
Following negotiations began that lasted several hours. The prisoners refused to talk to the police and claimed to speak only with those in charge of the Ministry of Justice and the prison authorities and in the presence of a lawyer of their choice. Obviously, the whole area surrounding the prison was immediately surrounded by hundreds of riot police forces and the anti-terrorist Unit. It should be noted that family members refused to leave the room, fearing that when they left the riot police would raid to slaughter the rebels. Some of the prisoners were able to communicate with the outside by telephone, but their statements were largely censored by the media. However, Mihalis Nikolopoulos was able to talk about the degrading conditions of confinement in general, lack of permits, the brutality of the jailers, i.e. the problems that all prisoners suffer. He also said: "Nothing will happen to the families. The only ones who can do damage here are the cops, so they should move away. "
Christos Tsakalos said: "Today we tried to do something. To gain our freedom and the continuation of urban warfare. We lost a battle, but we have not lost the war and continue to fight to win. We are an organization that fights for the ideals of a free life without any authority. "

At 23.20 the prisoners "freed" the guards and handed over the revolver and 3 knives. The family members, after being released from the prison, were taken to police headquarters in Piraeus, where they tried to convince them to file a complaint against the prisoners, but they refused.
Posted by sysiphus at 09:01