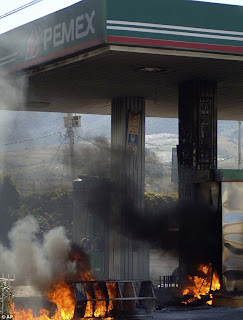 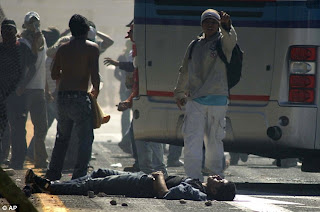 globalvoices
Two students, Jorge Alexis Herrera Pino and Gabriel Echeverría de Jesús, were killed on December 12, 2011 during a protest held by students of the rural school Raúl Isidro Burgos in Ayotzinapa, Chilpancingo, the capital of the state of Guerrero. The protest blocked the highway “Autopista del Sol” which leads to the tourist area of Acapulco.
La Jornada de Guerrero
Everything started with a smoke curtain, provoked by the tear gas bombs that came out of the hands of the federal police. [..] After that came the first gust of bullets form the federal police, who were authorized to proceed via radio. The second gust, which was longer, came from different hands: ministerial police opened fire against the students from the right lane (of the highway from north to south) […] It didn't take long for the federal police to aim at the same target. […] On the other side, Ayotzinapa's side, the rural students with a daily budget for food of 3.50 dollars, responded with sticks and stones. The domestic bombs that they had weren't used because they didn't have time to load them with gas from the 2 gas stations on of each side of the highway. Some, trying to defend themselves, had time to light up the bottles they got from the service station. The police then threw some fragmentation grenades at the students, that by then were seeking refuge in the space between the buses and concrete walls that divide the highway. There were five grenades in total and none detonated, but they provoked panic […]. The only ones not moving were two students, both 22 years old
Posted by sysiphus at 18:33