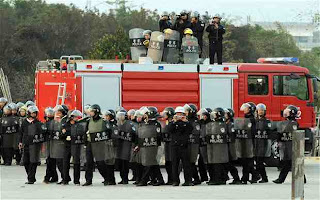 ( / Associated Press ) - Villagers gather to protest Friday Dec. 23, 2011 in Haimen, China. Riot police in the southern Chinese coastal town fired tear gas at protesters Friday on the fourth day of unrest over a planned power plant expansion, according to a demonstrator’s account and TV footage. A crowd of protesters were locked in a standoff with police near the entrance to a highway in the town of Haimen, demanding authorities release an unknown number of demonstrators, a man surnamed Lin.
Haimen’s protesters are demanding a halt to the planned expansion of a coal-fired power plant which they say has contributed to what they say is a rise in cancer cases and heavy pollution in the seas, a serious problem for a town where many make their living from fishing.
The protests started Tuesday when thousands of people besieged a Haimen government office and blocked a highway. When riot police used tear gas in an attempt to disperse them, demonstrators hurled rocks, water bottles and bricks in return. Clashes broke out, injuring an unknown number of protesters and police, residents say.
In response to the protests, the local government said Tuesday that it would temporarily suspend the power plant project, the official Xinhua News Agency said.
But protesters say they have not heard directly from authorities on the matter and say several protesters in their teens or early 20s had been detained.
It was not immediately clear how many people have been taken into police custody, but Xinhua said Thursday that five people had been detained by Wednesday for vandalism during the protests.This is the third time police have used tear gas to disperse protesters in Haimen this week.
Hong Kong’s Cable TV showed footage of tear gas clouds being blown toward protesters, scattering the crowd of hundreds of people. Riot police with helmets and shields had formed a blockade at the entrance to the highway.
Posted by sysiphus at 13:17