Tottenham, London, UK - People take to the streets after police killing. Petrol bombs thrown at police and a shop, two patrol cars and a bus on fire 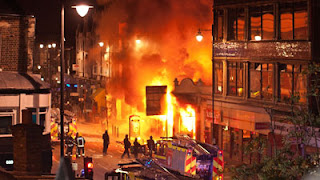 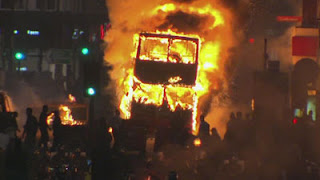 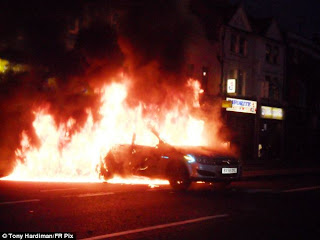 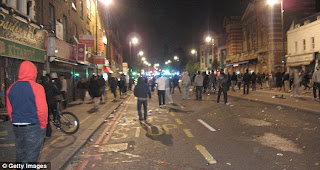 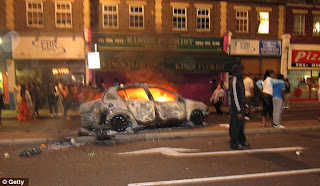 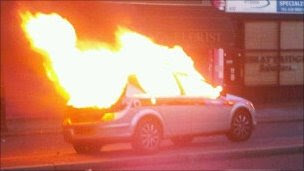 bbc
Protesters have gathered outside the police station on the High Road in Tottenham, north London.
It comes after a 29-year-old father-of-four, named locally as Mark Duggan, was shot dead by police on Thursday.
The Metropolitan Police said missiles were thrown at the cars, both were set alight and riot officers deployed.
A spokesman said about 300 people were on the streets but not all were involved in the disorder.
He said that officers dispatched to disperse the crowd had had bottles and other missiles thrown at them.
The force said the incident began after police officers parked two patrol cars on Forster Road and High Road and began patrolling on foot.
The spokesman said: "At approx 20:20 BST a number of bottles were thrown at these two cars - one was set alight and the second was pushed into the middle of the High Road. It was subsequently set alight.
daily mail
A family friend of Mr Duggan said the man's friends and relatives had organised the protest because 'something has to be done' and the marchers wanted 'justice for the family.'
Some of those involved lay in the road to make their point, she said.
'They're making their presence known because people are not happy,' she added. 'This guy was not violent. Yes, he was involved in things but he was not an aggressive person. He had never hurt anyone.'
It was revealed yesterday that Mr Duggan had been travelling in a minicab and was gunned down after an apparent exchange of fire.
sky news
2.01am "The Metropolitan Police have also opened their Gold Command Control centre, in south London - normally only used for major incidents, such as the Royal wedding and the student protests. This control centre is only ever activated for major public order events. It has to be a significant event for them to take the decision to move all their commanders down to this control room. There is a very real fear tonight that these localised disturbances do have the potential to spill out into other areas. Petrol bombs and missiles were also thrown at police, and there are reports of shops being burgled and looted. Two vans were set alight near a block of residential flats just off the High Road, as the violence appeared to spread away from the initial disturbance. Sky News were forced to withdraw camera crews from the area as the situation became increasingly volatile in the early hours of the morning."
Posted by sysiphus at 15:16