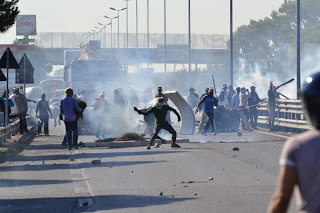 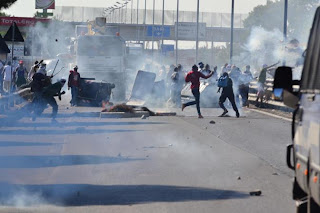 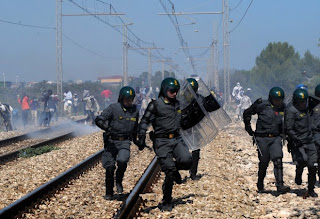 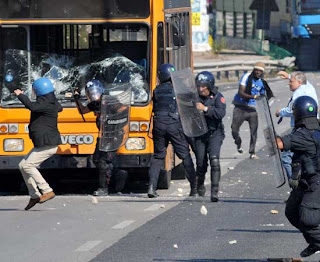 http://www.youtube.com/watch?v=R_dhFGyPEho
ROME - Hundreds of immigrants in Bari detention centre for immigrants have blocked roads and tracks near the centre in protest against the bureaucratic delays that delay the release of the status of refugees. Clashes in Isola Capo Rizzuto, in front of the reception centre.
In Bari, the migrants blocked Highway 16 in both directions and the railway line that passes close to Cara. The police have intervened massively. Violent clashes, dozens of injuries among agents, thirty arrested. The situation was a mess all morning, until the start of a negotiation and, at 2pm, at the end of the protest when the prefect of Bari provided written guarantees to respond to immigrants by Wednesday.
The rail traffic on the Bari-Foggia was interrupted between Bari and Bari Palese Airport Industrial Zone. This caused the cancellation of 12 regional trains and delays for many long-distance trains.
Shortly after clashes began between immigrants and the police. Some demonstrators armed with stones and iron bars attacked police. Police cars were damaged. Immigrants also attacked a bus, with stones. Most immigrants come from Central Africa: Mali, Nigeria and Cameroon.
They lit some fires along the railway line and placed rocks on the tracks. The blocks were gradually removed by the police and the Railway employees. With a series of charges and the use of tear gas the police have made the protesters retreat to the area of ​​Cara. Immigrants, however, continued to resist and were armed with iron bars and stones.
Posted by sysiphus at 11:02