Karranah, Bahrain - Cops injured in night of rioting in villages across the country 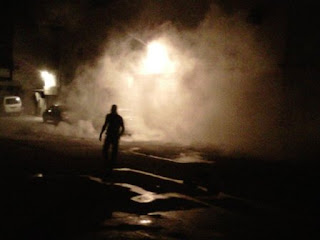 20 August 2011 - SIX policemen were injured, two of them seriously, while confronting rioters in Karranah on Thursday night. The Interior Ministry announced the injuries on its official Twitter account yesterday morning following a night of rioting in villages across the country.
Masked youths barricaded roads with bricks, cement blocks and overturned rubbish bins - hurling rocks at police dispatched to deal with the trouble.
However, sources inside the emergency services told the GDN yesterday that police were being routinely targeted on patrol - particularly in the past two weeks - by rioters who sometimes use women as shields.
"When we enter villages, we don't know if we will come out alive," they said. "While going on duties, we always tell our families not to wait for us.
"The rioters throw stones, metal rods and sharp objects at us, which can kill any human.
"And what are we wearing for safety - a helmet and bullet-proof jacket in some cases.
"They have damaged our jeeps which were used for patrolling, but they are cowards - they attack us and run away.
"They come out only at night and hide in dark places.
"As we can't see properly, we don't know where they come out from, they attack us and hide again.
"We are not only attacked by the young, but women, young girls and boys as well. A woman threw a big block from her balcony, which fell on our jeep, shattering its windscreen.