Leipzig - Arson-attack on CCTV-camera - 2nd August 2011 - Masked persons did huge damage by committing an arson attack (over 5000 euro) on a CCTV used by cops and by attacking the building of the AOK ( big insurance-company) with the use of stones. They might have wanted to start a direct confrontation with the police.

Around 2am eight black-dressed persons set up fire at Connewitzer Kreuz. A tram signal, traffic-sign and high-voltage-cable are burned. The fire took over and damaged the main cable of the CCTV-camera used by police. The unknown persons try to block this camera by attacking it with fire.
In the internet appeared a video. Underneath a comment saying: „ Again fire was set and AOK smashed. Yes, the resistance doesn't go on summer-holidays.“
Berlin - Car of security-company torched - 4th August 2011 - In the night of the 4th of August a car of the Piepenbrock company got arsoned in Berlin Schöneberg. The company does facility-management and cleaning-jobs, executed by precarious workers, mostly in big flats-buildings. There they get knowledge about the habits of the renters. This information is getting used by the security of the Piepenbrock-company. They work together with the cops and as a result play an active role towards a modern model of state and social control. For more about Piepenbrock:
Templin - Arson attack on police station - 5th August 2011 - Friday morning an arson attack was committed on the police station of Templin. Around 5:30am the officers heard a muffled noise coming from the facade and saw an unknown person escaping. The petrol-bomb, that got thrown on the facade just shortly sparkled and extinguished on its own. Just a little damaged was done and nobody got injured. The police are investigating in different directions.
Berlin - Copcar attacked - 06th August 2011 - A 45 year old police officer had to go to hospital because of an ear blast injury last night. He and another colleague were driving on Revaler Straße when they saw a crowd standing on the road in front of a club, waiting to get to the entrance. The cops told them to stand on the pavement, because car drivers really had problems seeing the crowd, as most of the people were dressed in black. When the officers went back in to their car a bottle got thrown at them and the right window got smashed. source: Polizeiticker
Freiburg - Car of the federal-police arsoned - 7th August 2011 - We received following claim:
"In the night to the 7th of august a car of the federal-police got attacked with several molotov-cocktails. That happened as a direct reaction on the repressive politics of the rioting executive-institution of the last days.
Controls, raids and evictions are committed against central autonomous spaces of this city. That cant happen with out a reaction!
For a militant perspective!"
Berlin - Broken windows at ex-Liebig 14 - 8th August 2011 - Once again unknowns damaged an ex-squatted house in Friedrichshain in the afternoon.
The owner reported that 2 windows and the doorbell panel of the house got destroyed.
The State security is investigating. source: Policepress
Berlin - And again broken windows - 9th August 2011 - A renter on Liebigstraße in Friedrichshain called the police last night, because unknowns smashed 3 windows of his flat. 2 of those got smashed and at the other one can see a round whole. The police assumes a political motivation and the State security is investigating. source: Policepress
Paint attack against „Pro Köln“ - Köln 9th August 2011 - following claim got published on indymedia:
"2 hours ago we attacked the offices of the right-populist party „pro Köln“ by using paintbombs.
We hope that we were able to bring a bit of colour into the brown daily life of this confused crowd and will come back regularly, with pleasure.
BUNTFRONT! ;)"
Köln - Headquarters of energy corporation RWE attacked with stones - 9th August 2011 - from the communique we received:
"Do not give up the hope-smash the energy-corporations! In the night of the 8th to the 9th of August we smashed the facade of the headquarters of RWE in Köln.
Not even one year passed by since the big accident (supergau) happened in Fukushima and will endanger the whole region for an unknown measure of time. People are contaminated – the rate of cancer and the number of children that will be born disabled will grow rapid. Contaminated water and food will fasten this processes. 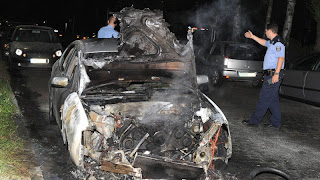 In Zehlendorf and Steglitz 9 cars were set on fire in the night to Thursday.
On Wednesday a arsonist got sentenced to probation and one day after 9 cars are burning in Berlin.
On Bolchenerstraße in Zehlendorf 5 cars were burning. Shortly before midnight unknowns torched them. 3 cars burnt out completely and 2 got damaged. Half an hour later the police was called again.2 cars were torched in Steglitz on Gutsmuthstraße and 2 cars around the corner on Hackerstraße. source: BZ
Berlin - Car of regulatory agency torched - 12th August 2011 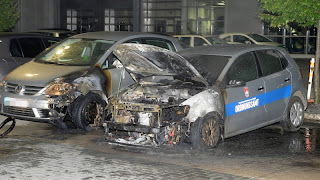 The series of car-arsons in Berlin is not ending. In the night of Friday 4 cars got set on fire in Schöneberg and Charlottenburg – during Thursday night already 9 cars were burning in Steglitz and Zehlendorf.
On Courbierestraße in Schöneberg an „Audi“ got badly damaged.
On Franklinstaße in Charlottenburg a car of the regulatory agency of Pankow got arsoned while it was parked on the ground of a car-dealership. 2 cars got damaged by the flames.
In Charlottenburg a Mercedes-Combi was burning later on.
Police investigates if a political motivation was the reason for the arsons. source: BZ
Berlin - Paint and stones thrown against a bank - 14th August - we received following claim:
"In the night of 14th august we smashed the windows of the bank 'Sparkasse', Heinrich-Heine Straße, Berlin. We painted on the window - 'UK brennt'.
This was in solidarity with the uprising recently in England and the people who are now getting repression.
Spread the insurrection!
Solidarity from Berlin."
Berlin - Cars arsoned - 16th August 2011 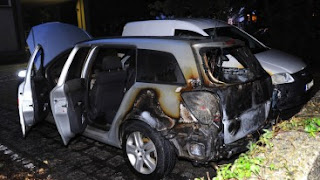 In the night to Thursday 11 cars got torched in between one hour in Charlottenburg. Police reported that the arsons started shortly after midnight. Almost every minute mostly luxury-cars got set on fire in the district Westend. Further on seven cars, a scooter and a bicycle got damaged by the flames.
Fire fighters extinguished the flames. Nobody got injured. If the arsons are politically motivated isnt clear yet. The state security investigates. source: Spiegel
Hamburg - Stones and paint against a newly constructed building - 16th August 2011 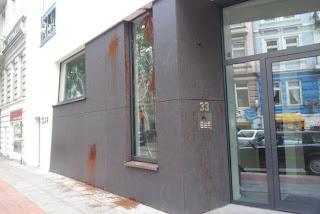 Unknowns threw stones and paintbombs against the building at Kleinen Schäferkamp. Protest against the changes in the district of Schanze?
In the night to monday unknown offenders threw glasses filled with paint against the facade of the building. The big windows at the main entrance got smashed and paint dripped down the facade and splashed as well on two cars that were parked nearby.“Undercover cops observed 4 suspicious persons around 0:08 am“, said Ulrike Sweden, the spokesperson of the police. But the men were able to escape. State security investigates.
Hanne Schöppner woke up around midnight because of a loud clash. She thought an accident happened and looked down from her balcony. The friend of her left the flat, a real estate on the 2nd floor of a newly constructed building, to check out what just happened. In the doorway he discovered the smashed and with brown paint damaged windows. „We couldnt really fall asleep again“, said the young woman on the morning. „Its scary and unsettling to get the hate of a small group.“ source: Abendblatt.de 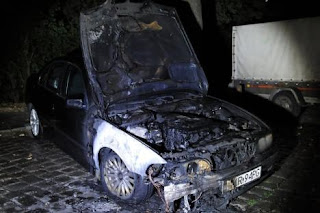 The massive series of car-arsons will not end in Berlin. In the night to Wednesday unknown offenders set fire to 15 cars. The investigators assume that the arsons of the last weeks were commited by leftextremists.
Most of the cars of last night were expensive – but as well a truck, a trailer and a scooter got arsoned. Most of the arsons happened in Charlottenburg, which is a decent district. The inhabitants are scared. source: Morgenpost