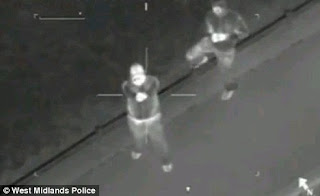 Police have released dramatic security camera footage they say shows masked and hooded rioters firing shots at unarmed officers and a police helicopter in the English city of Birmingham.

The footage shows a group of 30 to 40 young men, dressed in black, in the Newtown area of Birmingham as they attacked a pub late on Tuesday August 9, West Midlands Police said in a statement.

As police tried to disperse the group, petrol bombs were thrown at a police car and shots were fired, police said. Officers believe the rioters intended to set fire to the pub.