Hama, Syria - 'People are being slaughtered like sheep' in the streets 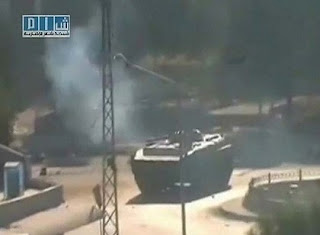 05/08/2011 - Gunmen in plainclothes are randomly shooting people in the streets of the besieged Syrian city of Hama and families are burying their loved ones in gardens at home for fear of being killed themselves if they venture out to cemeteries, a resident says.
Military forces launched an offensive against anti-government dissent in Hama on Sunday and at least 100 people have been killed since, according to human rights groups.
Phones, internet and electricity have been cut or severely hampered for days.
The resident told the Associated Press that people are being forced to ration food and share bread to get by during the holy month of Ramadan, when many Muslims fast from dawn to dusk then celebrate with large, festive meals after sundown.
"People are being slaughtered like sheep while walking in the street," said the resident, who spoke by phone on condition of anonymity for fear of reprisals.
"I saw with my own eyes one young boy on a motorcycle who was carrying vegetables being run over by a tank."
He said he left Hama briefly through side roads to smuggle in food supplies.
The resident said about 250 people have been killed since Sunday.