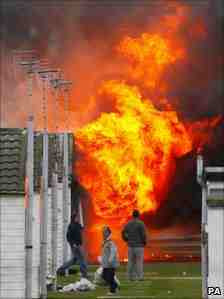 Ford open prison was extensively torched by fire during a riot by inmates at New Year. The riot was caused by zealous prison guards who were trying to breathalyze prisoners. Prisoners are not supposed to celebrate like everyone else. – “Do as you are told, not as we do”. Burn all Prisons – Destroy the State.

The only information currently available is from corporate media sources.

It seems six accomodation blocks at an open prison have been destroyed after inmates went on the rampage and started fires – allegedly over attempts to breathalyse them.The riot, at HMP Ford near Arundel, West Sussex, began at around midnight.It involved around 40 prisoners wearing balaclavas to protect their identities who smashed windows and activated fire alarms.The inmates, led by men from B wing, set alight five blocks in the morning, with another three on fire by noon.

Staff were forced to retreat and specialist control and restraint teams and fire fighters were called in. The riot was triggered after some prisoners refused to be breathalysed for alcohol, according to Mark Freeman, deputy general secretary of the Prison Officers Association. Mr Freeman said a large amount of alcohol had been found in the jail and staff had been trying to get inmates to take a breath test for several days.

Reporters at the scene said plumes of smoke could be seen above the prison all morning. The fires had destroyed six accomodation blocks, a mail room, a gym, a snooker room and a pool room with 10 new tables, they said. The loss of the accomodation means about 160 inmates will have to be moved to other jails. A Prison Service spokesman said: ‘We can confirm that around 140 additional prison service staff have arrived at Ford to support the local staff in bringing the prison under full control’.”