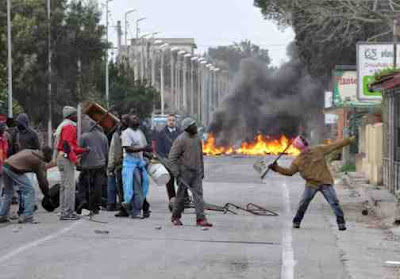 Hundreds of cars destroyed, garbage bins upturned and emptied on the tarmac, garden railings damaged. Scenes of urban guerrilla in Rosarno, in Piana di Gioia Tauro, with the revolt of a few hundred immigrant workers employed in agriculture and living in inhuman conditions in an old abandoned factory and another empty structure. The protest exploded following the wounding by unidentified persons of a number of 'extra-communitarian citizens' with an air rifle. The wounded, among whom also a political refugee from Togo with a regular stay permit, are not serious, but the will to react which had probably been hatching for a long time in the colony of workers crammed into the structure of Rosarno in terrible conditions, and of others in similar conditions in Gioia Tauro in premises of the Ex Opera Sila, did not take much to explode. Armed with sticks and metal bars, the immigrants, most of them from Africa, invaded the main road that goes through Rosarno setting up fires in some of the main streets of the town. The violent episodes saved nothing: everything the demonstrators came across, from cars, in some cases even with people in them, to houses, to bins and rubbish skips that were opened on to the road. The intervention of police and carabinieri lined up in antiriot gear in front of the fiercest of them had no effect, about a hundred people were held under strict control. Reinforcements arrived throughout the evening and, in a climate of palpable tension, negotiations were begun in the attempt to put an end to the protest. The population reacted to the situation of chaos that had come about and, during that time some young people from Rosarno, about one hundred, were following the progression of the situation a few hundred metres from the forces of order. All the heads of the police stations and the carabinieri companies of the Piana arrived at the scene. Between Rosarno, the abandoned factory, and Gioia Tauro in a building of the ex Opera Sila there are about 1.500 immigrants that work as labour hands in agriculture.