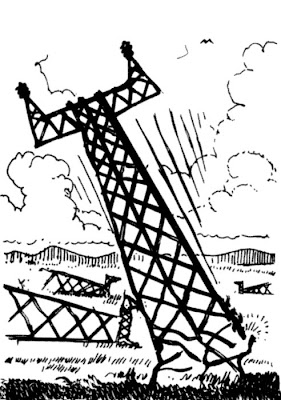 Society possesses various sticks. The one used to kidnap different beings is prison, where solitude and sadness reign.
The maginificent panopticon has seen a small flash of light at very close quarters. We hope that it broke the routine and stole a few complicit smiles from those who find themselves locked up for trying to expropriate something of their existence, for not submitting to the torture of work, and that the screws felt it on their skins, which is as sensitive as that of any other.
The place, a high voltage pylon, one of the reflexes of power, so our enemy. The chains of authority can be found in every breath. Liberation must be total, both for the earth and animals, humans and non humans.
We attacked very close to the prison of Santiago with an explosive device composed of an extinctor full of black powder and a detonator consisting of sulphuric acid in a condom and crushed match heads. Prison is not just a great edifice that is holding our comrades Axel, Pablo, Matias, Cristian, Flora (a particularly big hug). Authority takes many forms, it is also in each one of the institutions of the State starting from the family, then school, the psychiatric clinics and why not, even yourself. You can be your own prison warder. And as if that wasn’t enough, they are building prisons for children.
(...)
Our brotherly love to every individual that takes a position against any kind of authority, from the most simple gesture. We are launching an appeal for the free association of individuals as the way to organise oneself in contrast to the relations imposed by society, reflected from the genesis of our lives. To the warriors arrested in Mexico, who localised and attacked the enemy, power, and with it civilisation. Abraham and Fermin, a fraternal and antiauthoritarian embrace. We salute every action of solidarity with the last hunger strike. The spaces of power contiue to be struck without fear or respect. To Diego, may your flight be eternal, brother. You have offered us another choice and, even if we can’t see your smile, we hear your scornful laughter. To your memory, wild Mauricio Morales.
Against all authority: revolt and insurrection.
For the destruction of power and civilisation.
For the destruction of the prisons of humans, animal and the earth.
Marco Camenish Insurrectional Brigade