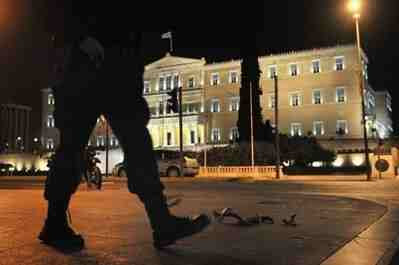 'An explosive device went off outside the Greek parliament in Athens on Saturday, prompting Prime Minister George Papandreou to condemn the attack and vow that "democracy will not be terrorised".

No one was injured in the blast and no damage was immediately reported, police said.

"This highly symbolic place for Greeks is not guarded and will not be," said Citizen's Protection Minister Michalis Chryssohoidis.

"We will not put Athens under a police regime; this is a free and open city."

Chryssohoidis said he was convinced that the perpetrators of the attack would be "arrested and brought to justice quickly".

Following the unprecedented attack on the parliament building Papandreou met with close aides at his office there.

"Democracy will not be terrorised," he said on arrival.

The explosion around 8:00 pm (1800 GMT) was preceded by a telephone call to the Eleftherotypia newspaper warning of the blast.

Police evacuated the area around the site where passers-by normally stroll close to the Tomb of the Unknown Soldier guarded by the presidential Evzones guards.

The changing of the guard, famous for its unique kilt-like uniform, is very popular with tourists visiting the Greek capital.

The explosive went off 17 minutes after the phone call, a little less than the time given by the anonymous caller.

The device which was fitted with a timer was hidden in a garbage bin a few metres (yards) from an Evzones sentry box.

Anti-terrorism officers were investigating the attack, the first to target the centre of Greek democracy, which police blamed on extreme-left militants or anarchists.'