Italy - Rosarno: the revolt of the slaves. Spartacus is back! 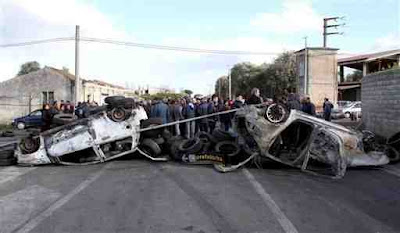 On January 9 and 10, hundreds of immigrants rose up in Rosarno, a little town in the south of Italy. After some were shot at with an air rifle, the insurgents, armed with sticks and stones, blocked the main roads by building barricades. From the centre of Rosarno, windows of shops and businesses were shattered, barricades were set alight and there were hard clashes with the police ...and some of the local population demanding that ‘all blacks be expelled from Rosarno’. Some citizens used their cars to run down immigrants, others armed themselves with batons, axes and guns to quell the revolt. On the evening of January 10, police and citizens managed to chase the immigrants from the town. Over one thousand immigrants were transferred to detention centres to await expulsion, hundreds of others escaped from Rosarno on foot, by car or by train. All four thousand immigrants have been chased out of Rosarno.
In the south of Italy, especially in agriculture, tens of thousands of immigrants are exploited in conditions of slavery thanks to an alliance of mafias, local politicians, and businesses. Most of them sleep in abandoned factories, with no water, heating or electricity. Already there had been revolts, which were often repressed in blood by mafia mercenaries.
This leaflet was given out in Genoa:

SPARTACUS IS BACK. LONG LIVE SPARTACUS!

The slave ceases to be such from the moment in which he tries to break his chains. At that moment, unconcerned about the consequences of his attempt dignity, desire, rage and a profound sentiment of injustice towards the the boss who forces him into slavery, comes forth once again in a liberatory manner.
The revolt of the slave is a supreme act, it is above everything an act of love of oneself and the whole of humanity. The revolt of the slave is hope and justice forged into weapons to become the concrete possibility of emancipation. It is quite simply the will for another life, possibly happy, that is affirming itself. The slaves of Rosarno have spoken. they have spoken through their acts and their rage. In the fires, the broken windows, in the uprooted road signs, in the beating of the police, hides the poetry of a lover.
Perhaps love without calculation, desperate love, love capable of being given, is something old. Just like slavery is an old thing. Perhaps that is precisely why today, those capable of understanding, of knowing how to read the poetry of the slaves of Rosarno, are few.
In this pathetic Italy, plunged into the fear of the ‘different’ and impregnated with hypocrisy, governed by vermin supported by even more imbecilic mobs corrupted by hatred and grown up in the mirage of accumulation and wealth, are today outraged. Outraged because of the violence, clandestine immigration, work conditions, insecurity and exasperation.
Well, shocked Sirs, honest Citizens, whether you are of the right or of the left, whether you are gooey with the treacle of Christianity or forged by the hammer blows of the Right, You are corpses.
Because only one ‘dead in spirit’ can debate a lover’s declaration of love in legal terms or inside the pages of a newspaper. Either you accept such a declaration, or you refuse it.
Those who accept the increasingly unbearable yoke of the State day after day, just like those who kiss the hands of the mafias when they strike, those who lick the ass of the boss - then grumble about the ones who are poorer or less fortunate - just like those who profit from other people’s misery; all such people will certainly refuse the advances of the immigrants of Rosarno. But these people aren’t worth talking to, they are not the ones that we want to talk to.
Those who will certainly know how to listen are the ‘libertines’, the spirits that still know how to desire, that still know the difference between surviving and living, between slavery and freedom. Who know that a thousand burnt cars are nothing compared to a man’s freedom and dignity.
Slavery consists of people and goods, businesses and relationships. It is possible thanks to a politic that is increasingly xenophobic and classist, supported by uniformed armies and mafiosi in white shirts.
The love of freedom consists of complicity and fantasy. The revolt of the African immigrants of Rosarno is a gift to all of us, now it is up to us to give something back.
Because nobody will ever be free until the last chain is broken.
Anarchists and libertarians of Genoa
Posted by sysiphus at 11:26