Siantiago - Explosive attack on the Bank of Chile 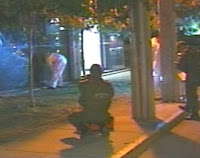 the facts
The detonation took place in the Bank of Chile agency opposite the shopping mall, Mall Plaza Vespucio, in the La Florida comune. The explosion occurred at 23.45 and caused damage to a wall and a window of the bank. Police of the Grupo de Operaciones Policiales Especiales de Carabineros rushed to the scene and, after carrying out the first tests, established that it was a question of an artisanal bomb, but were unable to establish the detonation system, the container and type of explosive.
Communique
During the night, Tuesday, we decided to attack one of the main expressions of capitalism: a bank (Banco de Chile, La Florida).
Corrupt businessmen along with the thieving politicians and bosses of the country have decided to manipulate the catastrophe and the crisis that is affecting us following the earthquake and the tsunami that followed, as a prosperous and lucrative affair, in which we can get ourselves into debt as before, but with more instalments, showing the "charitable" and disgusting face of these distinguished gentlemen in suits and ties, real clowns of corruption. This is the best scenario for them to increase their profits and increase social and capital inequality. We will not take one step back, nor will we let any government shut us up, seeing how every day the usual one get richer day by day.
25 YEARS FROM THE ASSASSINATION OF RAFAEL AND EDUARDO VERGARA TOLEDO
SOLDIERS OFF THE STREETS AND THE LAND OF THE MAPUCHE
ONLY THE PEOPLE HELP THE PEOPLE
FREEDOM TO THE MAPUCHE AND CHILEAN POLITICAL PRISONERS
FIRE TO CAPITAL
DOWN WITH GOVERNMENTS AND THE RIGHT
translated from culmine
Posted by sysiphus at 01:56