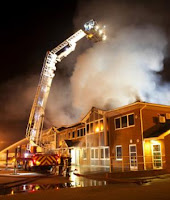 Firefighters are tackling a large blaze after a suspected arson attack on two industrial units in Hampshire.
The fire started in the roof space of the units in Fareham Industrial Estate at about 0300 GMT.
More than 40 firefighters have been tackling the flames but have been hampered by poor local water supplies, although it is now under control.
Police said the incident was being treated as arson and warned people that roads in the area will be closed.
Group Manager Dan Tasker said "The internal structure of the building and poor water supplies at the location have hampered firefighting operations.
bbc news
Posted by sysiphus at 09:43