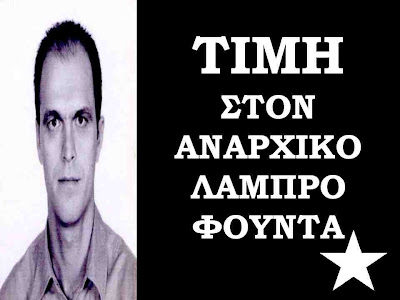 Comrade Lambros was a real fighter and an example for all of us. True rebel, sworn enemy of inaction. Austere, sober, selective, determined. UNTIL THE END, HEAD of himself. Furthermore, he did not fall into the trap of making a contract with his life. A contract with life is for those who get divorced into the selection of legal transaction.
Consider these not-so-grand, but honest words, as a last farewell to a comrade and freedom fighter.
Let history speak ...
Giorgos Voutsis Bogiatzis
prison, 11 Μarch 2010

After the end of the big demo in Athens today a group of people approached the Ministry of Culture in Bouboulinas from the back street (Zaimi), walked into the parking and set fire to a State van parked in the internal courtyard of the Ministry, in memory of the comrade Lambros.