We are not slaves, we are dynamite 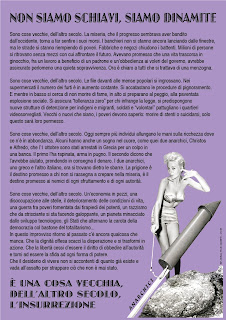 They are old things, from another century. Poverty, which progress seemed to have banished from the West, comes back to make us feel its bite. Bankers aren’t jumping from windows yet, but the poor are filling the streets. Factories and shops close their doors. Millions of people find themselves with no means for facing the future. They were promised that a life passed on their knees, between a job that profited a boss and obedience to the will of the government would at least ensure a quiet survival for them. Now it’s clear to all that this was a lie.

They are old things, from another century. The lines are swelling in front of soup kitchens. The number of thefts in supermarkets is constantly growing. Foreclosure proceedings pile up. And while those on the bottom try not to die of hunger, those on top prepare for the worst, for the feared social explosion. “Zero tolerance” is guaranteed for anyone who breaks the law; new structures of detention are being prepared for natives and immigrants; soldiers and “volunteers” patrol neighborhoods that are under video surveillance. The old and new poor have to know: dying of privation or suicide, these are the only choices permitted to them.

They are old things, from another century. Today, more and more people are reaching out to grab wealth from the places where it exists in abundance. Some even have a dream in their heart, like the two anarchists, Christos and Alfredo, who were arrested in Greece on October 1 for a bank robbery. Christos robbed the bank at gunpoint. They claim that Alfredo aided him, taking the money on delivery. Now the two anarchists, one Greek and one Italian, are behind bars. Prison is the fate promised to anyone who isn’t resigned to dying in misery, the fate promised to the enemies of all exploitation and authority.

They are old things, from another century. A shattered economy, skyrocketing unemployment, the deterioration of living conditions, a war among the poor fomented by the powerful henchmen, racism speeding up from a mere creep to a gallop, a planet threatened by technological development, States alternating the carrot of democracy with the stick of totalitarianism…
In this sudden return to the past, there is still something missing: the offended dignity that drives desperation away, transforming it into action; the freedom that stops being the right to obey authority and goes back to being the challenge to every form of power; the desire to live that isn’t satisfied with what exists and mounts an assault to snatch what has never been.

IT’S AN OLD THING, FROM ANOTHER CENTURY: INSURRECTION