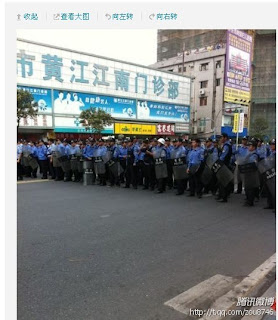 BEIJING -- More than 7,000 workers went on strike at a southern Chinese factory making New Balance, Adidas and Nike shoes, clashing with police in a protest over layoffs and wage cuts, a rights group said.

Dozens of workers were injured on Thursday as police tried to break the strikers' blockade of the main road in the factory town near Dongguan in Guangdong province, China Labor Watch said in a statement late Friday.
The strike at the Yucheng factory in Huangjiang township took place in the wake of layoffs last month of 18 managers, a move seen by workers as a preparation for the factory's relocation, the New York-based group said.
One of the fired managers told the China Business News his departure was part of a plan to shift production north to Jiangxi province to save on rising costs in the Pearl River Delta around Dongguan, a key manufacturing center.
The strike was the latest in a series of incidents involving labor disputes and perceived social injustices in Guangdong, known as the workshop of the world for the tens of millions of migrant workers who toil in factories there.
Workers at the Yucheng factory were also angered by the recent elimination of performance bonuses and a ban on the overtime they said they need to meet the cost of living.
Posted by sysiphus at 14:44