Tunisia is on the brink of revolution 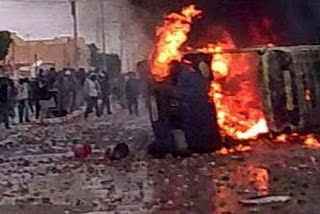 TUNISIA is on the brink of revolution, as the people rise up against poverty, corruption and repression.
Internet rumours abound that president/dictator Ben Ali, a friend of France's hated President Sarkozy, will be forced to cede power and flee the country - it is said his family have already fled.
His Thursday night TV speech to the nation - offering major reforms and a lifting of internet censorship in a bid to cling on to power - was dismissed by many as a "dead man talking" and the words of an habitual liar.
He was clearly trying to buy time and wait for the momentum of the revolt to die down, in a trick used by tyrants throughout history.
And there is no sign that an angry population will take him at his word, with more protests planned for Friday in the wake of much bloodshed on the streets.
Social media online have provided the fuel for the uprising, as the tame Tunisian media and the corporate western media have failed to provide the coverage events undoubtedly deserve.
A constant stream of postings on the situation can be seen at the Blogs of War site.

Among the news reported there:
Scores of people have been killed by security forces - 60 or more in total.
President's brother Sofien Ben Ali's new house in Hammamet (built on stolen land) has been looted & burned.
Giant posters of Ben Ali, to be seen throughout Tunisia, have been ripped down and burned.
Posted by sysiphus at 16:01