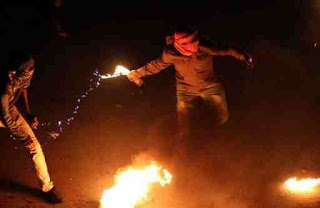 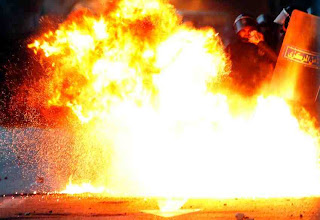 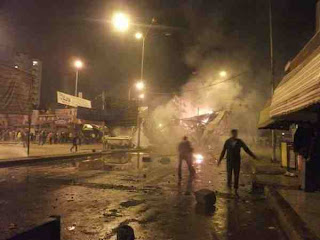 27 Jan 2011 - SUEZ, Egypt (Reuters) - Egyptians torched a police post in the eastern city of Suez early on Thursday morning over the killing of protesters in anti-government demonstrations earlier in the week, a Reuters witness said.
Protesters in Suez had on Wednesday set a government building and another police post on fire, as well as trying to burn down a local office of Egypt's ruling party. Those fires were all put out before they engulfed the buildings.
The Reuters witness said police fled the post that was burned on Thursday before the protesters hurled petrol bombs.
Dozens more protesters gathered in front of the second police post later on Thursday morning demanding the release of their relatives who were detained in protests.
Demonstrations demanding the resignation of President Hosni Mubarak, in power since 1981, have raged since Tuesday across several cities, including Cairo and Suez. Officials say hundreds of people have been arrested.
All three protesters killed in demonstrations to date were in Suez. A policeman was killed in Cairo.

Hundreds of protesters gathered outside a police station in the eastern Egyptian city of Suez and threw Molotov cocktails on Thursday, demanding the release of detained protesters.
Riot police faced down hundred protesters in Suez with teargas, rubber bullets and water cannons. A fire station was set ablaze, according to an AFP photographer.
Demonstrators had gathered at the police station to demand the release of about 75 people detained since anti-government demonstrations started in Egypt on Tuesday.
Protesters also gathered in Ismailya, about 50 kilometres to the north.
Seven people have died -- five protesters and two policemen -- and 60 more injured. At least 1,000 people have been detained.
Posted by sysiphus at 13:59