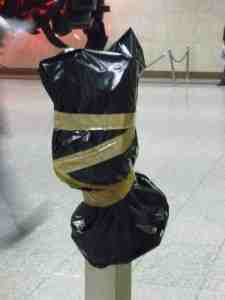 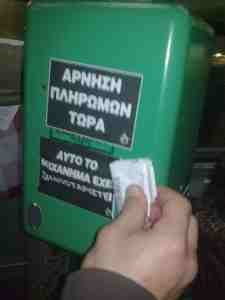 "payment refusal now!
this machine has been sabotaged" 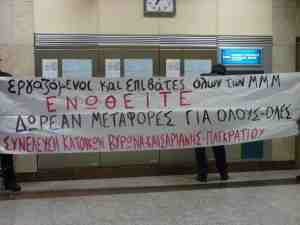 21 Jan 2011 - Lately, apart from the significant cuts in wages and the monstrous laws that the government and the IMF pass, there are tremendous increases in the prices of products and services. Of course the government wouldn’t let public transport fares out.
Apart from the increases of rail fares in National Railways (double prices), the suspension of many train/bus/ship routes and the privatizations that will follow, it has been announced that from early February there will be a 20-50-% raise in fare prices of public transport and also stronger control measures (more security, CCTV, special gates, etc.). In many routes the price increase reaches 180%!
During the last month, in Athens and Thessaloniki, neighborhood assemblies, collectives, squats and students organized actions against fares raise and control in public transports, proposing free transportation for all.
On December 10th, in Athens, a coordinated action by many groups of people took place in subway stations, bus and trolley lines, sabotaging ticket-cancelling machines, distributing thousands of texts, posters, stickers and leaflets.
On December 23rd, a similar coordinated action took place in several subway and bus stations and depots, while metro workers had covered the ticket-cancelling machines during their actions against the new work measures.undefined
On January 11th, the third coordinated action took place in several stations by groups of people with text distribution, flags, ticket-cancelling machines sabotage etc.
In Thessaloniki, similar actions against fares raise took place on January 8th and 15th, with symbolic occupations of buses, texts distribution, ticket-cancelling machine sabotage etc.
Also, actions take place in smaller cities like Kozani and Heraclion where students and residents went on assemblies and symbolic occupations of buses and the city hall.
More actions are organized in a larger scale by various initiatives in Athens and Thessaloniki.
Waiting for all these new measures, more and more people have become indignant and response positively to actions for free transportation like the above, although many are still numb..
Ticket controllers will have troubles during next months.
FREE TRASPORTATION FOR ALL
NO CONTROL IN OUR LIVES
Posted by sysiphus at 12:54