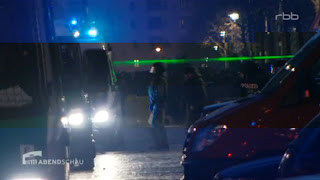 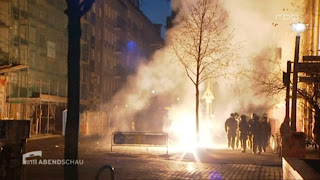 29 of January 2011 - Violent confrontation occurred during a demonstration against the eviction of the houseproject Liebig 14. Autonomen threw cobblestones causing several injuries in the police lines.
Masked up demonstrators first destroyed the windows of a shop located in the front of the house which is due to be evicted, afterwards they attacked the police with a rain of stones.
A lot of fireworks were exploded against the police lines, also from the roof of the houses in the Liebig and Rigaerstr., from where some paintbombs were also thrown.
The police speak of several injured in their lines, two journalists were also injured.
About two dozen demonstrators were arrested.
Such an explosion of violence has not been seen in Berlin since the riots on 1st of May 2009.

The demonstration began around 3.30pm at Kottbusser Tor in Kreuzberg with about 1000 people. The banners read „Defend the Liebig 14 – We stay all“ or „Stop rising rents“.
The first bottles and fireworks have been thrown once arrived at the Liegenschaftsforum.
This place is hated by the scene as an institution which paves the way for gentrification, since it is responsible for selling empty buildings which are property of the city.
From this moment on the atmosphere got hot.
Violent autonomen mixed up with the rest of the demonstrators, they joined the demonstration later on in order to avoid the police controls.
The police speak of 2000 demonstrators, the scene of over 3000.
The police were present with 700 policemen until Bersarin Platz, where they stepped back - a move which some witnesses described as a tactical mistake.
The violent ones were able to gather in „their“ district on the corner Liebig/Rigaer and started to smash up one shop which is owned by the same landlord of the Liebig 14.
The violence ended after half an hour, as the police attacked they were also pointed at with some lasers, a forbidden weapon which can potentially blind people.
-----
Police car attacked with stones – Cars burned
Berlin, 29 of January 2011 - Unknown people attacked a police car with stones around 2am in the Köpenickerstr. The car was damaged, the police did not suffer any injuries.
Unknown persons also set an „Audi A6“ on fire, a „Fiat Ducato“ parked nearby was also damaged by the flames.
Source: Morgenpost
Militant demonstration in solidarity for the Liebig 14
Stones against banks, Kaiser supermarket and DHL packet station – a Porsche on flames
Berlin, h29 of January 2011
we received the following claim:
„on the night of the 28 of January we attacked with stones the Sparkasse banks in the Muskauerstr., in the Heinrich-Heine.Str./Annenstr. as also the Kaisers supermarket located in the front of the latter and a DHL packet station, as also we set fire to a Porsche parked in the Annenstr.
We left these flyers on the spot:
„At daggers drawn with state and capital as also with its guards and representants. Let us destroy the world of goods in order to make a life in freedom be possible.
Attack the police congress – Defend Liebig 14
Autonomous groups“
Leipzig, the 28 of January 2011

A demonstration in solidarity with the Liebig 14 took place on Friday evening in Leipzig (Connewitz).
About 70-80 people moved under the motto „No eviction without us! - Defend left radical freespaces“, accompanied by a lot of fireworks.
In the sleepy Connewitz one chanted „Berlin, Berlin – we will travel to Berlin“ in order to attention about the upcoming eviction there. The neighbors showed support for the demonstration.
Some people began to get rid of some annoying cameras and smashed the office for the citizens of the city Leipzig.
The damage should amount to 18.000€, according to the press.

Offices of the bailiff and lawyers attacked with stones and paint
Berlin, 28 January 2011
Evict the bailiff!
„On Thursday one payed a visit to the office of the bailiff who is going to be responsible for the eviction of the Liebig 14.
The office was smashed and made nicer with paint. We also left a small message to him.
We won`t take the upcoming eviction of the Liebig 14.
In case that it will take place we will make as expensive as possible.
Let us hit the responsible ones there where we can!
Let us excalate the situation during the next days, one which Berlin has not yet witnessed.
Let us make feel the gentrifiers that they made their plans without us – because Berlin is and remains a risk for capital!“
source: l14soli.blogsport.de
From the press:
Supporters of a house in the Liebigstr. which is due to be evicted threw stones and paintbombs against two buildings in the district of Rümmerlsburg.
Around 11.45 a passerby saw four people dressed in black throw several paintbombs against the facade of a house in the Kernhoferstr, they also smashed six windows on the ground floor and spraypainted „Defend L14“.
Also in the Lauenburgerstr. in Steglitz paintbombs were thrown against the offices of the lawyer which represents the interests of the owner of the Liebig 14, graffitis have been left behind.
Source: Berliner Umschau/Bild
part of claim
(for the Liebig 14 – Edwin Thöne, one of the owners of the Liebig 14, is the president of the association which has been targeted) 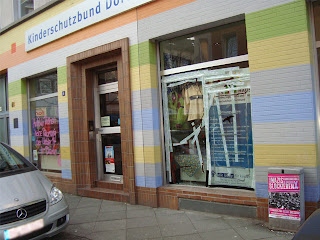 „In the night from the 27 to 28 of January a solidarity action for the houseproject Liebig 14 in Berlin, which is under eviction, has been undertaken.
(...)
The offices of the League for the protection of the children, which had a technical problem with its windows, surely did not managed to get warm despite the heating system put at the top level.
Another window havs been covered with the graffiti „To Edwin Thöne: no eviction of the Liebig 14 in Berlin!“.
(…)“
Attacks against the city council, the senate and one estate agency
Berlin, 24 of January 2011
we received the following claim:
„in the night to monday we threw four paintbombs with green-yellow colour against the city council.
On Tuesday of the past week we also attacked the senate office for the city development with two paintbombs and on Friday of the previous week an estate agency with an hammer.
The neoliberal city development leads to displacement and exclusion.
The ruling politic supports this development.
The upcoming eviction of the Liebig 14 is a part of this strategy.
We are against the way of organizing of the housing market which obeys the interests of capitalism.
State.Capital.Housing Market.Attack!

The defence of the Liebig 14 can only be the first step within a struggle against the capitalist attack on our housing situation.
Liebig 14 stays
Action group.
City“„Since one made known the upcoming eviction of the alternative houseproject Liebig 14 several facades have been rendered nice with color.
Among others, the office for the order in Neukölln as also the offices of the SPD in the same district, the Liegenschaftsfonds (note: it sells all empty city properties of the town) in the Wahrschauerstr. and also some lofts in Treptow and Friedrichshain.
All these actions have been made in clear solidarity with the Liebig 14, but they never found their way to the police report, nor the press.
The actions are an enraged answer to the upcoming eviction of the Liebig 14, the daily displacement through gentrification and unsocial city politic, which we are not the only ones who have to suffer from it.
Defend the Liebig 14!
Stop rising rents!
For a free choice of your own living place! 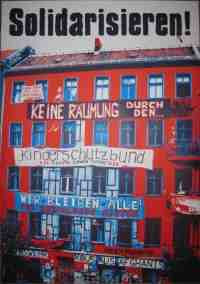 note: “Liebig 14 is one of Berlin longest running autonomous housing projects, serving as a space for collective living as well as community and political organising for over 20 years. After a 4 year legal process the owners of the building have finally been given legal permission to evict the house. Squatted shortly after the fall of the wall in what was a derelict area of east Berlin, Liebig 14's attempted eviction is just one sympton of a rampaging processes of gentrification which is rapidly forcing poorer residents out of the city centre and tearing apart the city’s radical infrastructure.
Posted by sysiphus at 10:16