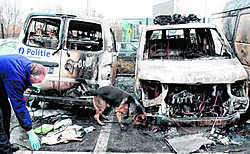 25.1.2011 - GHENT - Two police cars were torched. They were parked on a parking lot of a VW garage, which has a contract with the police of Ghent to repair their cars and vans. Also two other cars parked on the terrain got damaged. The author(s)had to climb into the area to get to the cars.
Two years ago, in 2008, on exactly the same spot, also two police cars got torched.
Justice is investigating the arson. Police doubts that there exists any link between this arson and some other arsons against cars in Ghent this latest weeks.
Posted by sysiphus at 17:10