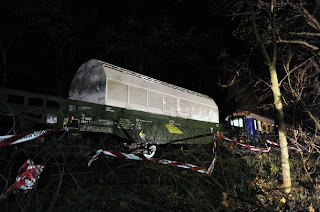 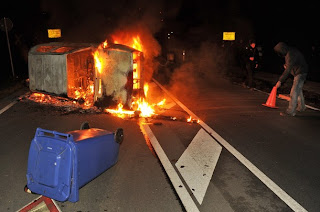 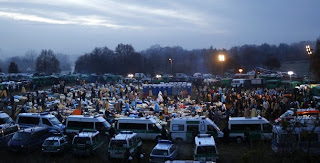 reuters
Dannenberg November 8, 2010. German police detained about 800 protesters who refused to leave the tracks after more than 3,000 protesters blocked the tracks on Sunday disrupting a shipment of eleven Castor rail containers of reprocessed German nuclear waste to the storage dump in Gorleben.
Anti-nuclear protestors against the transport of nuclear waste from France to Germany used a burning vehicle as part of a barricade during protest in Metzingen on November 7, 2010. A train carrying the 123 tons of nuclear waste, dubbed by activists "the most radioactive ever", was loaded onto lorries at Dannenberg for transfer to the nearby storage facility of Gorleben, in northern Germany.
Posted by sysiphus at 06:07