Santiago, Chile - 83 prisoners dead, many more critically injured, as a result of being locked up as prison burned 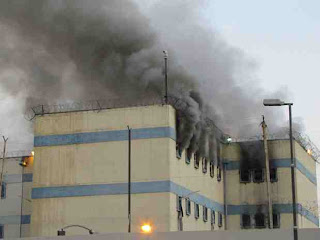 8 Dec 2010 - Fire engulfed a prison in the Chilean capital early on Wednesday, killing 81 [now 83] prisoners and critically injuring 14 others, prison officials said, in the worst-ever accident in the country's jail system.
Officials said the fire was triggered during an early-morning fight between prisoners [it has since been said that there is no evidence of this] in one of the crowded prison's five towers. Television footage showed part of the San Miguel prison in flames, black smoke billowing from the building.
Frantic relatives of the prisoners flooded to the jail's walls, screaming and imploring police to let them in to rescue their loved ones. Some threw rocks at police inside the prison perimeter in frustration.
"There are 81 dead, and we hope that figure won't rise," said Luis Masferrer, director of the national prison system. "This reflects the precarious state of Chile's prison system, which we have been denouncing and working to rectify since we took over (in March)."
"Overcrowding is a factor that will have to be analyzed in determining the causes of this terrible incident," he added.
Justice Minister Felipe Bulnes said the prison housed 1,960 inmates, nearly twice the 1,100 inmate capacity.
Radio station Bio Bio reported that around 200 prisoners had to be evacuated into a jail yard due to the fire.
Posted by sysiphus at 05:58