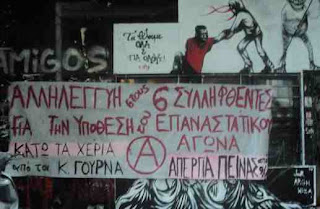 actforfreedomnow!
October 29 2010 - Solidarity gathering today at hospital cancelled. The gathering today at the “Laiko” hospital that was called in solidarity with the two hunger strikers Kostas Gournas and Nikos Maziotis, who together with Pola Roupa have taken the political responsibility for Revolutionary Struggle, has been cancelled. The two comrades, who were transferred to the hospital because of the seriousness of their situation, demanded that the examinations take place without the antiterrorist cops inside the hospital room. The head of the hospital as well as the doctors of the pathology department of Laiko hospital refused to exam the two comrades without the cops inside the room (!!!) resulting in the two fighters refusing to do the examinations and being returned to Koridallos prisons.
Discussion about the above tonight at 19.00 at the Polytechnic (gini) building.
Posted by sysiphus at 18:16